KARDASHIAN fans have noted a strange detail on Khloe’s face in new photos snapped during the CFDA Fashion Awards this week.

In pics shared on social media, fans spotted something seemingly “weird” up with the Good American boss’ makeup.

Khloe, 38, along with several people in her circle shared photos online from the CFDA Fashion Awards.

Some of those pictures were shared on Reddit, where fans questioned the look of her makeup.

One user pointed out: “Khloe’s got some reverse contouring going on on her forehead. I don’t know how to explain it. I don’t hate the dresses but the hair/makeup seems off.”

Others agreed, with one adding: “Yeah, it’s lighter near her brown and darker in the middle of her forehead. Very weird lol.” 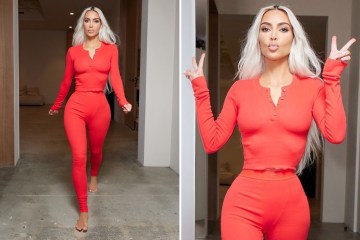 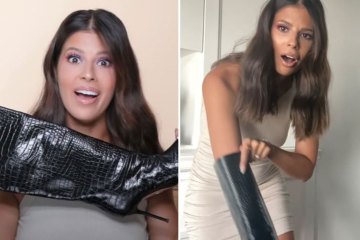 “Yes, it is not good. Yikes for her glam team,” someone else wrote.

A third critic commented: “Whatever it is, it’s bad. Imagine having access to a bunch of makeup artists, the best quality makeup and skincare products, but you serve…this.”

“Omg yea the lucky charm forehead is no bueno,” someone else joked.

Another person added: “Looks like they didn’t blend into her hairline.”

Khloe shared a number of photos and videos from the awards show, including snaps of herself.

In one video, shared by her makeup artist on her Instagram Stories, the Hulu star showed off her thin frame in a tight dress.

The clip showed her striking a pose on the white carpet.

She rocked a bronze metallic cutout dress that exposed her side and under boob in a big way.

Khloe’s nipples were near-visible beneath the thin fabric as she posed for the cameras and her hair was pulled back into a tight bun.

Along well as heavy black eyeliner and bronzer, the mom-of-two was seen posing with a bandage on her face following a cancer scare.

She posed next to sister Kim on the carpet, who also flaunted her slim figure.

At one point, Kim appeared to kick Khloe’s long dress train on the carpet to make room for herself to pose in front of the flashing cameras.

Kim opted for a wet-look black latex mini dress and wore her hair slicked back.

Although the main body of her dress was super-skimpy, the 42-year-old covered her legs with a floor-length sheer skirt.

The figure-hugging outfit showed off her toned arms and slim silhouette.

Both showed off their tiny, slimmed-down frames, as they equally lost a large amount of weight since 2021.

Khloe has been, for the most part, quiet about concern over her weight.

She appeared to hit back in a subtle way, however, after the CFDA Awards.

The TV personality shared videos of herself eating pizza and even showed off a plate full of slices in front of her.

Shortly after, she was accused of faking it.

The reality star took to her Instagram Stories on Monday night to share a heavily filtered clip of herself munching on a large slice of pizza.

The TV personality wore gray sweats and her hair slicked back as she seemingly dug into the massive slice.

Khloe then panned the camera down to show three more slices in a box on her hotel bed, one of which was half-eaten.

Re-shared by the fan account @kardashiansocial, many viewers rushed to the comments section as they noticed a strange detail.

Some believed the Good American founder was “fake eating” as she seemed to already be eating her pizza before she even took a bite.

“She’s chewing the pizza before taking the bite,” one claimed.

“Eeeeek this is absolutely cringey. Why does she need a filter to eat pizza?” a second complained.

A third claimed: “She making believe that she’s eaten,” while a fourth remarked: “Yucks that pizza looks gross and the way she’s eating it weird af.”

Kanye West Reveals Kim Kardashian Has Kids 80% Of The Time